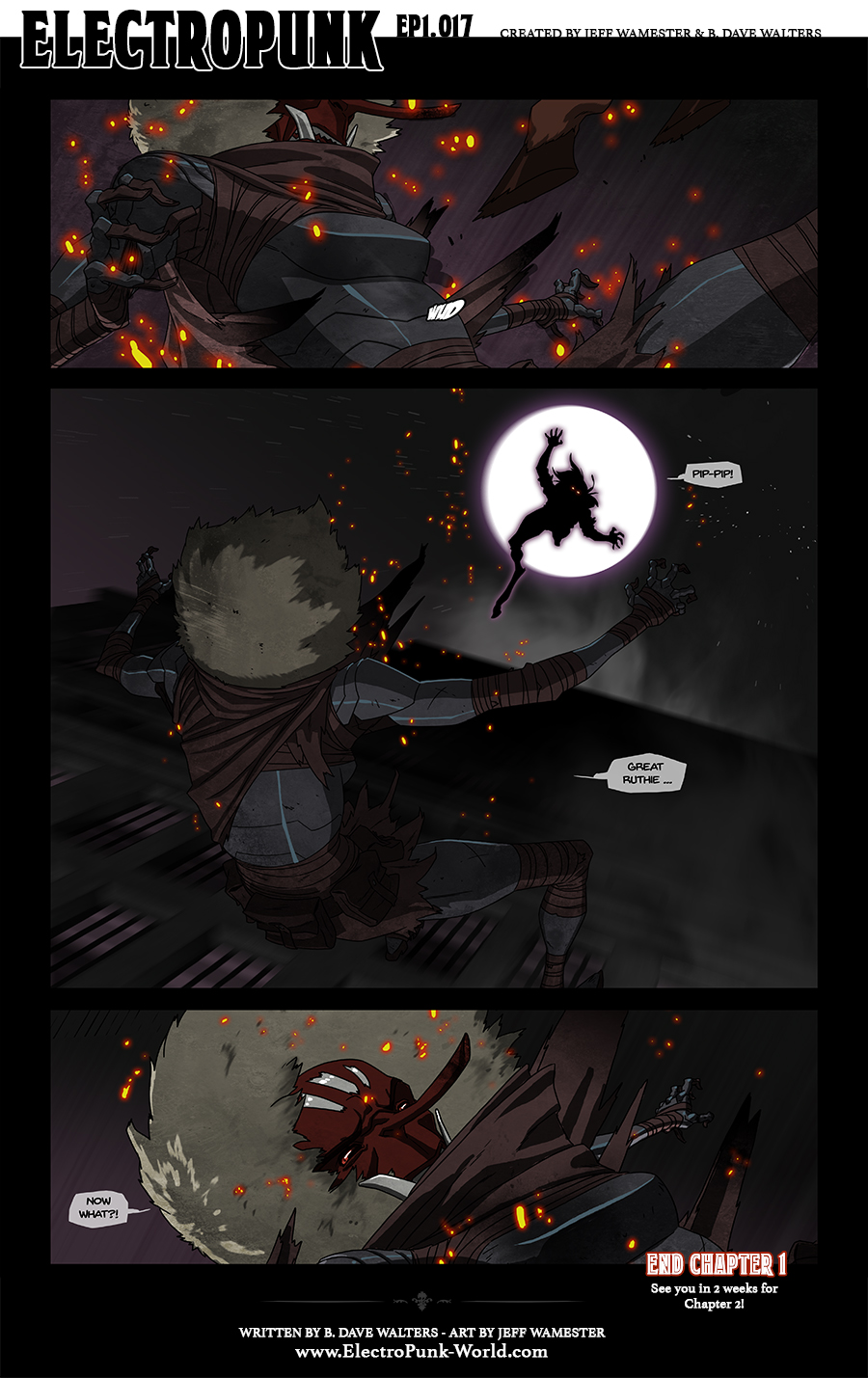 Sorry for the delays, folks!  So, we’ve got some good news, and bad news:
The good news is, some wonderful opportunities have opened up for both of us; the bad news is, that means our time is going to be stretched very thin.  We’re going to keep updating Electropunk when we can, but it’s going to be a while before we can get back to consistent weekly posts.

Thank you for your patience, and we look forward to taking this next step journey together.

Be sure to subscribe so you’ll be notified when the next post goes up…Ruthie and Chuck will return!

Ruthie stared in the mirror, frowning at an errant strand of hair that refused to be pinned. Her forest green dress was conservative, but functional. Her knee length skirt and sleeves all had break away snaps hidden inside to make fighting easier. She’d been tripped up by her clothes before…literally; never again.

Ruthie looked at the woman she saw in the mirror. She was almost 20 years old, but there were thousands of miles in her eyes. She studied every bump, bruise, and scar, remembering where they came from. The story, like all stories, revealed itself when you looked closely…like the jagged line under her ear where some reuben drunk on panther piss came at her with a broken bottle. She smiled, thinking of how good it felt to feel his arm break when she disarmed him. Chuck had been so mad at her; she wouldn’t stop talking about it while he was trying to stitch her up. Above her eyebrow there was a thin scar she’d gotten from head butting that gargoyle in Chicago; it bleed so much inside her helmet it blinded her right eye for 3 days. She looked at her arm holding the brush; speckled burn marks dotted it from the incident in Pittsburgh. Chuck still hadn’t quite forgiven her for that one, but his face was priceless.

“Applesauce,” she cursed under her breath, brushing futilely.

“You’ve never been any good at that,” her brother commented, accurately.
“Hush. I wasn’t lucky enough to get Mom’s hair like you were.”
Ruthie always hated it when Chuck snuck up on her. She had long accepted the fact that the Colonel was a ghost, but with her twin brother it should be different. The only thing that made her feel better was the fact that she was able to get the drop on him just as easily. Maybe it was because of the connection in their blood; your left hand doesn’t really keep track of your right hand, either.

Chuck walked up behind her and took the brush from Ruthie’s hand, despite her protestations.
“No, let me do it; stop, stop!”
“The Colonel is bringing the car around, and we both know you could spend the next hour in here and not get it right.”
“Applesauce,” she quietly cursed again; arms crossed, and brow furrowed. She gave Chuck her best glower in the mirror, but she knew he was long since immune. He stood there working carefully, brushing and pinning her hair with the same focus he gave to everything. His face mirrored hers in more ways than one; his bones were stronger but his eyes calmer. He had a slight bump in his nose from all the times it was broken and reset, but you really had to look closely to see it. Everyone called uncle Nikola a wizard, but the Colonel was the real magician when it came to setting bones. He also had a small line of pin prick sized dots along his jaw from where an odd goblin like thing had bitten him once. To this day, they had no idea what that thing was, only that it was dead now.

So, they knew all they needed to know.

“There you go, ready for the world.”
She turned her eyes back to the mirror, and once again Chuck had worked his magic. Her hair fell along her shoulder in gentle rings, with glamorous sweeping curl over her brow. And, as pretty as it was, it didn’t block her ears or obstruct her eyes; beautiful but functional. Perfect.
“Chuck, you’re an artist.”
“I have a beautiful canvas,” her brother said warmly.

He had opted for royal blue, with pants cut similar to a military style. He favored an elastic fabric that Uncle had created, which let him move while still affording him some limited protection; knives and small caliber firearms and such. His multiple pockets, both seen and unseen, made sure they were never unarmed.
“Well,” she thought as she flexed her fist, “we’re never completely unarmed now, are we?”

Chuck looked down at his sister, smiling in the mirror. She stood up and hugged him tightly, before punching him in the shoulder for good measure.
“Meet me in the launch bay,” the Colonel’s voice came over the intercom; “I’ll be there in 3 minutes.”

The twins made their way towards the back of the ship, running a mental inventory of the various things they had stashed on them. Ruthie’s hair pin daggers, the brass knuckles she had tucked in the bow on her lower back, and the knife she kept tucked into her garter belt. Chuck kept some smoke bombs, a handful of the new phosphorous bombs, his own brass knuckles, and an admittedly untested tube of a new adhesive Uncle Nikola had created. He had told them the substance would essentially be unbreakable by anything but the solvent he’d created, and Uncle Nikola tended to be right about these things.

As part of the launch of Electropunk we are sharing the prologue of the ongoing Patreon exclusive story with you!  Click here to check it out!

And here we go!

The first thing you need to know about Electropunk: Children of the Future is, it’s Transmedia.  That means the story is being told in lots of different places, all at once. The characters Ruthie, Chuck, Tesla and the Colonel all have their own social media profiles where you can read their posts and interact with them, too.

Some useful links:
https://about.me/electropunk a quick overview of the story, and quick links.

https://www.patreon.com/Electropunk Our Patreon feed, where we create cool stuff to thank you for helping make Electropunk happen.

This has been years in the making, and we hope you enjoy the ride!

• Nikola Tesla •
54-year-old Serbian inventor: His genius is rivaled only by his compassion, but both make him as incomprehensible to his closest friends as he is to strangers.

• Colonel L. Livingston •
54-year-old English war hero: He was mortally wounded and legally de- clared dead, before Tesla’s inventions saved his life and restored his physical body. In public he wears thick clothing to hide his mechanical parts and seem as unassuming as possible. He is the twin’s trainer and mentor.

• Charles Tesla •
19-year-old Serbian boy: Not quite as sharp as his twin sister, but what he lacks, he makes up for it in brawn.

19-year-old Serbian girl: As beautiful as she is brilliant, and twice as stubborn. Ruthie lives life face first.

• Home
• About the Writer: B Dave Walters
• About the Artist: Jeff Wamester
• What is 'Electropunk'?